The Arkansas Tech University Bands have been led by three "Founding Fathers" from 1910 - 2011.

Arkansas Tech University opened in the fall of 1910 as the Second District Agricultural School. It was primarily a specialized high school whose very first student to enroll was the man who would later become the school's first band director, Marvin Williamson. After just one year of study, he left school. 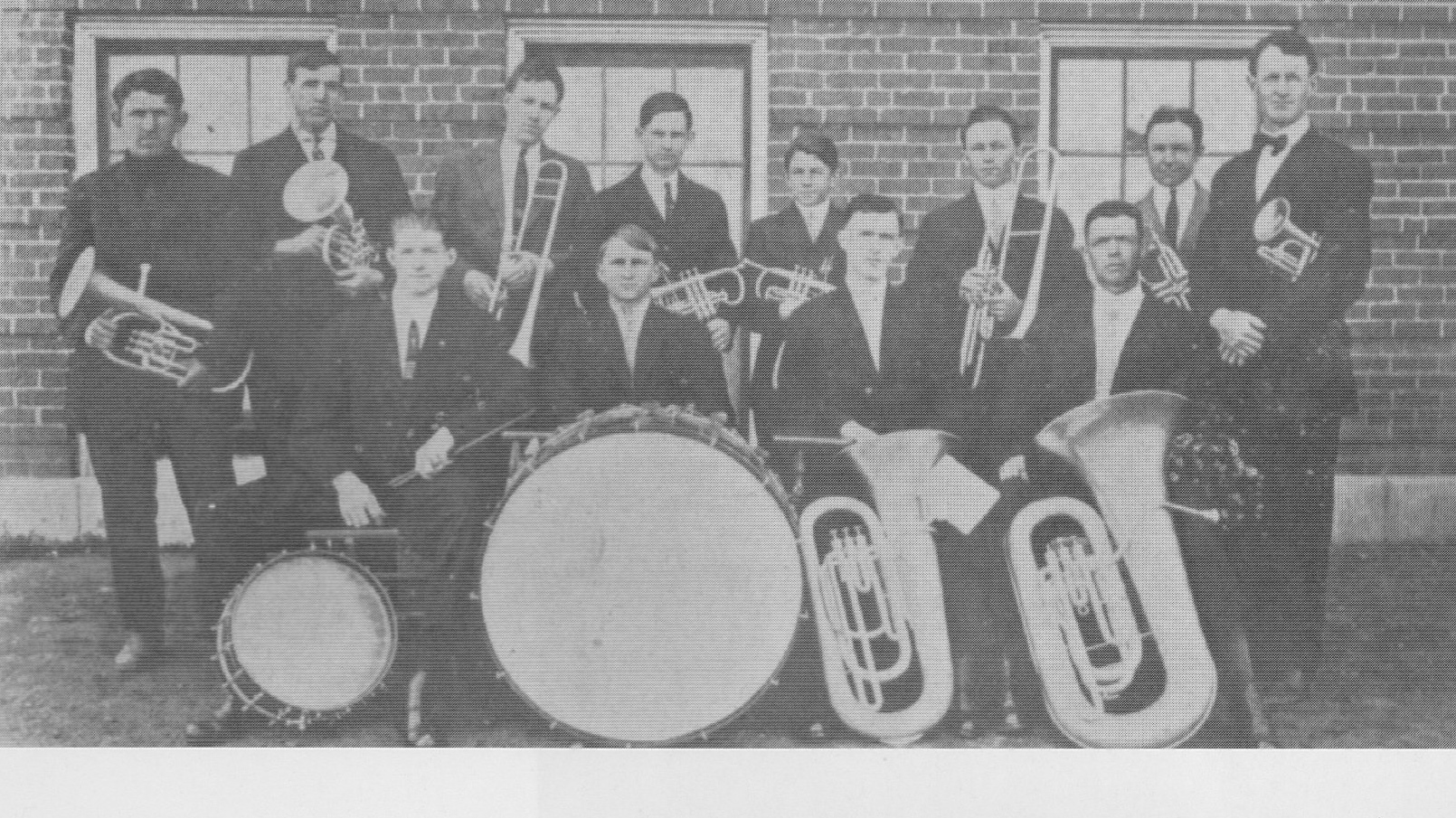 In 1913 he was asked to direct the first band organized by the school which consisted of 15 members. It's interesting to note that he had no academic credentials other than his one year spent at the school in 1910-11.

His natural leadership skill and artistic talent formed a solid foundation on which others would build in the years to come. Williamson was both director of the band and the orchestra. In those early days, the orchestra consisted of both men and women, but the band was made up entirely of men. That changed in 1922 when Edna Hood, a saxophone player, joined the band. The next year another female saxophonist followed in her footsteps.

From early on, the band became an important part of the athletic program at the school. According to the Agricola yearbook of 1925: "The band lends amusement to the student body by furnishing interesting programs on different occasions and the members of the band deserve part of the honor for every victory won by the 'Wonder Boys' on the gridiron, diamond, court or track."

Williamson became nationally known when he directed the band on the 'Arkansas on Wheels' excursion through the Atlantic seaboard and eastern states and his programs brought the school much publicity. He also added a women's drum corps and a Dance Orchestra in the early 1930's. The latter was especially revolutionary considering there had been a ban against campus dances.

A dramatic change in the history of the Arkansas Tech Band came in 1950 when Marvin Williamson, director of the group from its beginning in 1912, stepped down from the podium and handed the baton to Gene Witherspoon. Under Witherspoon's leadership all of the instrumental music groups on campus began to grow in size and quality.

Among the highlights of Witherspoon's career was the creation of the Arkansas Tech Brass Choir, the addition of the flag line to the marching band, and the introduction of the summer band camp program. However, Witherspoon is probably best remembered for the Fine Arts building which bears his name. Witherspoon Hall opened in the early 1970's and is still the home of the Music Department.

By the late 1960's the band had gained so much attention that they began to be known as "Arkansas' Band of Distinction." The music program attracted some of the best students from around the state. Out of the 105 students enrolled in band in 1967-68, 75 were all-state band students in high school. Their quality led them to receive invitations to perform in music conferences in Ann Arbor, St. Louis, Houston, and Kansas City. In 1976 Witherspoon handed over his duties of the marching band to Dr. Robert Casey, but stayed on as head of the Music Dept.

He remained in that position until he died suddenly a few years later. "Chief" Witherspoon's memorial service was held in the auditorium of Witherspoon Hall before a standing-room-only crowd.

Hal Cooper became the new band director in the fall of 1979. Under his leadership the band continued its growth. A six-member rifle team was added to the Marching Band in 1979, a Wind Ensemble was formed in 1984, and in the spring of 1990 the expanded growth led to the formation of two performance bands. Continuing to receive invitations to music conventions, the Wind Ensemble played for the Arkansas Music Educators Association in Pine Bluff and toured western Arkansas and the Tulsa area. The Symphonic Band and Concert Band performed in Oklahoma, Kansas, Louisiana, as well as other cities in Arkansas.

In 1987 the band was chosen to perform for the dedication of the Vietnam Veterans Memorial in Little Rock. The Marching Band continued to participate in a number of exhibition marching shows and area parades in addition to performing at football halftime shows and in1996 they had grown to 160 members. By this time the band's attendance at athletic events was expected and anticipated. Cooper celebrated with the band at Homecoming in 2000 honoring fifty years of the "Band of Distinction." The band then honored him in 2004 for his 25 years as Director of Bands at ATU. He stayed in this role until his retirement in May of 2011, closing out another chapter of ATU band history and opening the door to continued future excellence.