Our Vision: Promote the use of alternative fuels in clean power generation systems and transportation and using renewable and sustainable energy resources to supply environmentally-friendly power.

Mission Statement: Lead in the discovery, innovation, and advancement of science and technology for improvement of our way of life.

Current Research Projects: The lab has active research projects in the following areas:

The objective of this study is to fundamentally investigate the effects of burner air and fuel inlet configuration on the stability of flameless combustion and the rates of pollutant formation. In this newly proposed design, fuel is injected axially from one end of the cylindrical-shaped combustion chamber and air is introduced tangentially (imparting air swirl) from the other end of the chamber. Effects of air swirl being considered here has not been previously investigated but is expected to enhance performance. Exhaust gases exit the combustor from the same end where the air is introduced.

The miniaturization of small-size power supply appliances with high energy density is becoming an important issue all around the world. This is because of the fast development of Micro Electro Mechanical Systems (MEMS) during the previous decades. Small-scale combustion has great potential to be employed in many small-volume systems to supply energy demands such as power supplies for portable devices as well as propulsion units in small spacecrafts. Due to the large energy densities of hydrocarbons (~50 MJ/kg), small-scale combustion-based power generation is competitive with lithium batteries (~0.6 MJ/kg), even when the overall efficiency is around 10%. However, the reduction of combustor size has encountered some challenges. In small-scale combustion systems, due to small size of combustor some issues such as thermal management, fluid mixing, residence time and flame quenching become more important. In non-premixed meso-scale combustion systems the rate of heat loss from combustor’s wall raises because of increment in surface-to-volume ratio and hence less enthalpy is preserved in the combustion products. Moreover, since in small-scale systems the flow residence time becomes less than the combined mixing and chemical times, flame stability will be a crucial challenge. To overcome flame quenching issue in meso-scale combustors, the concept of excess enthalpy has been developed to redirect hot burned gases to preheat cold reactants (without mass exchange) to make a stable flame. However, excess enthalpy designs suffer from complexity.

Therefore, in this work, experimental investigation on meso-scale non-premixed vortex combustion systems with thermal recuperation is suggested to stabilize gaseous flames in small scale combustor for use in power generation in micro-electro-mechanic systems (MEMS) and propulsion systems. The proposed system is based on non-premixed asymmetric-swirl combustion concept which has shown stability characteristics for small-scale combustors. It is expected that the results of this proposal will substantially improve combustion stability in meso-scale combustors. This will also contribute towards the performance of small-scale propulsion units. It is expected that the flame stability region to increase due to fully tangential inlet air which creates a strong vortex flow. Moreover, the vortex flame in the reaction zone has a toroidal structure resulting from the interaction between the axial fuel jet and strong forced air vortex. Therefore, even though the fuel and air are non-premixed at the combustor, the reaction zone of asymmetric vortex flame shows premix combustion features, particularly regarding the flame color and brightness. Indeed, it is anticipated that the flow in the asymmetric vortex combustor to demonstrate recirculation phenomena. A central recirculation zone could be in the core of the combustor, and two other recirculation zones were found in the in the asymmetric region. A strong azimuthal velocity component, created by the negative pressure, is formed in the central recirculation zone. A strong swirl flow will be ensured when the inlet air velocity is very high. 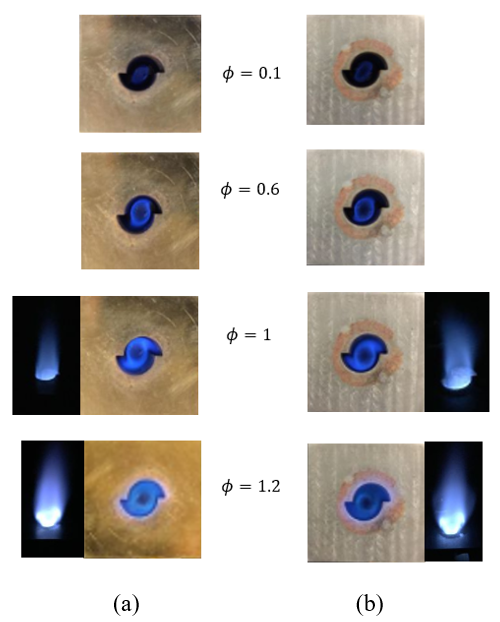 This study is focused on the application of phase change materials (PCM) in low temperature systems, and the influence of using PCM in a domestic refrigerator. A type of eutectic PCM solution is added to the inner compartment walls of a household refrigerator by using commercially available PCM filled containers. Water is also used as a PCM and is added to the surface of the evaporator. The system is tested to determine the effects the PCMs have on the system. The effects of PCM on the refrigeration system are investigated by comparing the On-Off cycling of the system, total run time, and energy consumption with and without PCM. The benefit of PCM in the case of power outages is also investigated. The analysis of the results illustrates a significant improvement of the performance compared to a conventional refrigeration system.

Three different cases were tested for a time period of about 1,000 minutes.

Case 1 : Empty operation (no PCM was applied)
Case 2: 0.5 kg of water applied to the surface of the evaporator.
Case 3 : 2.5 kg of eutectic material applied to walls of compartment section.

Inside refrigerator temperature and electricity usage were monitored for each case. 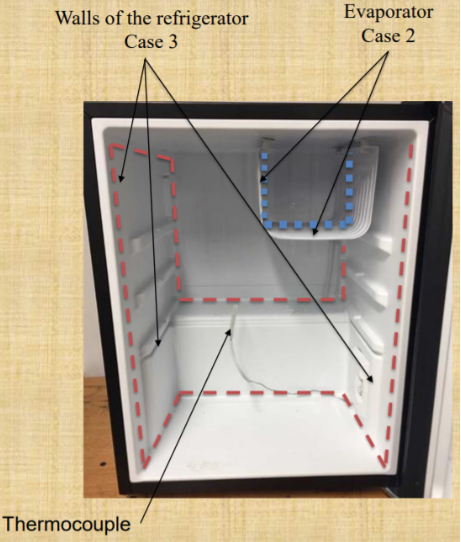