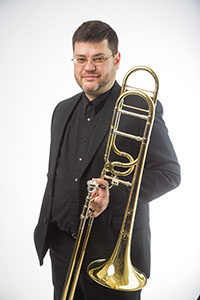 Dr. Reed has also performed with the Houston Symphony, Bangkok Symphony, the Siam Philharmonic, the Buffalo Philharmonic, the Israeli Chamber Orchestra, the Austin Symphony, and the Arkansas Symphony Orchestra. Prior to his tenure at ATU, Dr. Reed was the Director of Brass Studies at New York University. Dr. Reed lived in Southeast Asia before returning to New York, teaching as a Visiting Assistant Professor at Yong Siew Toh Conservatory at the National University of Singapore and as an Assistant Professor of Trombone at Mahidol University in Bangkok, Thailand. Dr. Reed served as Executive Director of the Southeast Asian Youth Orchestra and Wind Ensemble conference (SAYOWE 2005), Dr. Reed traveled throughout Southeasts Asia, and auditioned young musicians from Thailand, Vietnam, Malaysia, Singapore, Indonesia, Myanmar, and the Philippines to work with internationally renowned soloists and conductors.

Dr. Reed serves as an Associate Professor of Music at Arkansas Tech University. He teaches applied trombone and euphonium, and brass instrument methods, and is the Director of the ATU Jazz Ensemble.  In the years that Dr. Reed has been at ATU, he has directed numerous all-region jazz ensembles in Arkansas, and in 2015, he directed the second All-State Jazz Ensemble at the Arkansas School Band and Orchestra Association convention in Hot Springs, Arkansas. He has presented, as a clinician, at the Arkansas Bandmasters Association Convention (Little Rock), and at the Arkansas Music Educators Association convention (Hot Springs). In January of 2018, Dr. Reed was the jazz clinician at the Four States Bandmaster's Convention and Clinic in Texarkana, where he was made an Honorary Lifetime Four States Bandmaster.

Dr. Reed Continues to perform and serve as a clinician on the national and international level as well. Recent performances include the Texas Christian University Trombone Summit (Ft. Worth, TX), and the International Trombone Festival (Rochester New York). In summer of 2017, Dr. Reed performed, as part of an on-going collaboration, with trumpeter Masahiro Makihara and the Masahiro Makihara Quartet in the Nonaka Anna Hall in the Shibuya Ward of Tokyo, Japan. In 2018, Dr. Reed recorded an album entitled Trombone Songs with his teacher and mentor, Dr. John Marcellus.
EXTERNAL LINK DISCLAIMERFaculty Website
Jump to top section