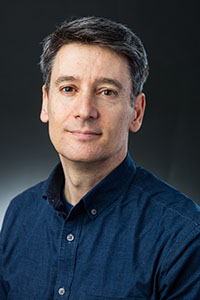 Acclaimed as a clarinetist of "great artistry and virtuosic command of the instrument" (The Clarinet magazine), Nicolas del Grazia is Associate Professor of Clarinet at Arkansas Tech University, and has appeared as soloist, chamber and orchestral musician throughout the United States and Europe. Performances have taken him as far afield as Vienna's MusikVerein, London's Barbican Hall, and the Tel Aviv Museum of Art (Israel).

A strong advocate of contemporary music, he has performed with a number of leading new music ensembles, including Brave New Works and Chicago's Pocket Opera Players, and Aguava New Music Studio, heralded as "brilliant" by the Washington Post and as "easily one of the most impressive new music ensembles in America today" by the International Record Review. He has worked with a number of the country's leading composers, including David Felder, Evan Chambers, Kristin Kuster, Dorothy Chang, and MacArthur Genius prize winner John Eaton.

An active scholar and researcher, Nicolas del Grazia has twice been the recipient of awards from The International Clarinet Association for his research. His work focuses particularly on lesser-known works for clarinet from the first half of the twentieth century, and he has published work on the hitherto unknown Pastorale & Rondo by Mario Castelnuovo-Tedesco, and the unfinished Quartet for Clarinet and Strings by Alexander Zemlinsky.

Nicolas has taught clarinet at Indiana University's Jacobs School of Music and Denison University, and has given masterclasses and clinics at universities throughout the US and abroad, including the Vale Veneto International Music Festival in Brazil.

His musical studies were at City University London, the Guildhall School of Music (London), and Indiana University's Jacobs School of Music where he completed a D.Mus degree in clarinet performance. He also holds a Master's degree in Music Theory and Analysis from King's College London, and enjoys composing virtuosic encore pieces for the clarinet. The "pixelated humor" (AllMusic.com) of his Tarantella for clarinet and piano can be heard on ITALIAN VINTAGES, on the Centaur label.