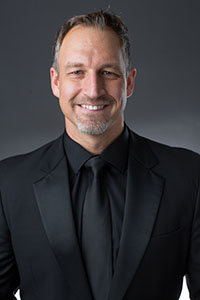 Daniel A. Belongia is professor of music and Director of Bands at Arkansas Tech University.

Previous teaching appointments include serving as a tenured faculty member of the Illinois State University School of Music from 2005 – 2015, and as a public school band director at the middle and high school levels in Florida and Texas. He holds the Doctor of Musical Arts degree in wind conducting from Michigan State University, where he was a Kenneth G. Bloomquist Fellow and served as teaching assistant in wind conducting at the University of Miami Frost School of Music, where he earned the bachelor and master's degrees in music education and performance.

As trombone soloist, he can be heard on the University of Miami Wind Ensemble compact disk, New Music for Winds and Percussion, and he is conductor, editor, and producer of the Naxos “Wind Band Classics” recording Point Blank.  His research has been published in the Journal of the World Association of Symphonic Bands and Wind Ensembles, the journal of The International Society for the Investigation and Promotion of Wind Music, the National Band Association Journal, the Instrumentalist Magazine, Keynotes Magazine, and multiple volumes of the Teaching Music through Performance in Band and Teaching Music Through Performance in Beginning Band reference series.   He is a former marching member of The Cavaliers Drum and Bugle Corps, and was a performing member of the Star of Indiana, “Brass Theater” featuring the Canadian Brass.  He has served on the staff of several drum corps in a variety of capacities.