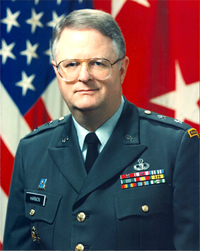 As a General Officer he was the Program Manager of the Joint Tactical Fusion Program Office from 1984-1990; and was the Program Executive Officer for Command and Control Systems from 1990-1992.

Bill Harmon holds a Masters Degree in International Relations from the University of Southern California, and is a graduate of the United States Army War College. He is a member of the Arkansas Tech Hall of Distinction, and the US Army Military Intelligence Hall of Fame.

His military decorations include:

Bill and his wife, Suzanne, reside in Russellville. They have three sons, a daughter and five Grandchildren.