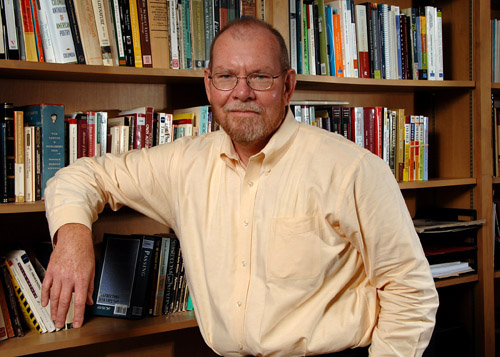 On November 15, 2007, Dr. Chris Ellery lectured on Texts and Values, the Value of Texts: True Education in the Age of Fanatics" as part of Techs Norman Lecture Series.

In 1975, Chris Ellery was one of the first students to earn Techs Bachelor of Fine Arts in Creative Writing. He earned a Master of Arts in English at the University of Arkansas and a Ph.D. at Texas A&M University. He is now Professor of English at Angelo State University, teaching American Literature, Film Criticism, and Poetry Writing. He co-founded and helps to organize the annual ASU Writers Conference and serves as the Concho River Reviews book review editor. He has received the ASU Alumni Association Award as Outstanding Faculty Member in the School of Liberal and Fine Arts (1999-2000) and the ASU Teaching Excellence Award (2005-2006).

Ellerys short fiction and poetry have appeared in dozens of journals and literary magazines, including most recently Cimarron Review, Tar River Review, New Texas, and descant. His poem Bimaristan Arghun won the 2005 Betsy Colquitt Award and Eucharist at the Canary Hotel received an Honorable Mention in the Allen Ginsberg Poetry Awards contest. A full-length play, The Feast of Stephen, was produced by the Angelo Civic Theater (San Angelo, Texas) in 1992.

Ellery is co-translator (with Asmahan Sallah) of Whatever Happened to Antara, a collection of short stories by award-winner Syrian author Walid Ikhlassi, published in 2004 by the Center for Middle Eastern Studies at the University of Texas. His other books are Quarry, a chapbook of poetry, published in 2004, and All This Light We Live In, his first full-length poetry collection, published in 2006 by Panther Creek Press.