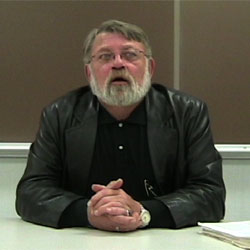 On April 11, 2007, Clay Reynolds, the author of over 700 publications, including twelve books, read at Arkansas Tech University. Reynolds, who teaches at the University of Texas at Dallas, has published novels, short stories, poems, reviews, encyclopedia articles, and criticism.He has served as fiction editor and as an editorial consultant.

To view a video of Clay Reynolds's discussion of his story "Blue" click here.