Though a mild-mannered family man, English teacher, and Acxiom employee in his daily life, Dave Buhajla's dark imagination and his dedication to writing have resulted in many publications in the past few years. His poem "Skull Pit" appeared in Counterexample Poetics; his story "The Great Feasting" appeared in Sex and Murder. The poems "Perspective" and "Rituals" appeared in The Rose and Thorn Journal. The poems "Visions of Fire" and "The Last Chronicle of Art Buchinsky" appeared in Danse Macabre. "A Brief Understanding of What it Means to be Lucid" and two other poems appeared in Bone Orchard Poetry. Recent short fiction includes "Cigarettes and Cicadas," in Horror Zine, "Wind and Indigo" in the gloaming magazine, "The Truth of Sand and Stone" in Socerous Signals, and "Midtowne" in Death Head Grin. 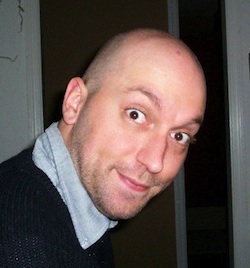