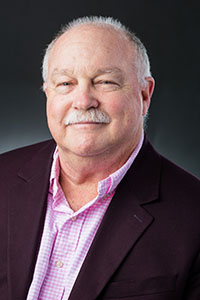 Associate Professor of Music Ken Futterer is in his 39th year at Arkansas Tech University where he teaches the double reeds and saxophone. Professor Futterer also teaches composition, upper level music theory, jazz improvisation, and is director of the music theatre program where he serves as music director and conductor for university and community productions, including the 2008 critically acclaimed production of Steven Sondheim’s Assassins and this year’s ATU production of The Robber Bridegroom. Ken has conducted both the ATU Concert and Symphonic bands, and has been a guest conductor for All Region Jazz Band clinics and Band camps bands. As a performer Ken has served as principal Oboist for Opera in the Ozarks, the North Dallas Chamber Orchestra, and the North Arkansas, Ft. Smith, and Arkansas Symphony Orchestras. As a jazz musician, Ken is a member of the “John Cotton Quartet” and "Jazz Reunion," with whom he regularly performs keyboards and saxophone, and has performed with touring shows including 4 Tops & The Temptations. Professor Futterer was appointed 3 times by former Arkansas Governor Mike Huckabee to serve on the Arkansas State Arts & Humanities Council and is now serving as President Emeritus on the Board of the Dance Foundation and a member of the National Steering Committee for Opera in the Ozarks. Campus honors include the Faculty Excellence Award for Service, 7 terms on the ATU Faculty Senate and 2 terms as President of the ATU Faculty Senate. Finally, and most importantly, Ken weekly teaches 6th & 7th grade beginning oboe and bassoon students in local public schools.

Professor Futterer was a student of saxophonist Harvey Pittel and holds the B.M.(1975) and the M.M.(1980) from the University of North Texas where he studied oboe with Charles Veazey, theory with Robert Ottman, and composition with Martin Mailman. Ken is an honorary member of Kappa Kappa Psi, Phi Mu Alpha Sinfonia and Pi Kappa Lambda, the national music honor society. In the capacity of audio engineering, Ken is a former voting member of the International Audio Engineering Society and developed a series of sound effect recordings for the United States Army for use in Desert Storm that are still in service.

Ken is married to ATU Flute professor Karen and is the proud father of 3 daughters; Erin, Keely & Carling, whom are all accomplished musicians and beautiful young women.