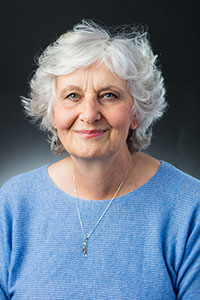 Karen Futterer began flute studies in 10th grade. She  received a BM in performance from SUNY Fredonia and a MM in performance from UNT where she was also a teaching fellow. .  While at UNT she played principal in the Chamber Orchestra and the Symphony under Maestro Anshel Brusilow. During that time, she was also a featured soloist with the NTSU Chamber Orchestra and played principal flute in the North Dallas Chamber Orchestra. She came to Arkansas Tech in 1980 with her husband Ken. She was principal in the Fort Smith Symphony for 2 years and won the Principal flute position in the Arkansas Symphony in 1982. She was a featured soloist 4 times during her 12 years as principal flute and retired from the position in 1994 but continued to play with the Arkansas Opera at Wildwood for another 10 years. She was also a soloist on several instrumental concerts presented by Wildwood Opera Orchestra under Maestro Benton Hess.  She has been a clinician and presented master classes throughout Arkansas  and has adjudicated solo and ensemble competitions in Arkansas and Oklahoma. She has been a soloist with high schools in Arkansas and New York and has been listed in Who’s Who. She was a Muramatsu Artist/Clinician but currently plays a Landell flute which belonged to Murray Panitz. Ms. Futterer teaches flute and  Music History, coaches woodwind ensembles and flute choir as well as maintaining a private studio. Arkansas Tech graduates of the flute studio maintain positions as outstanding administrators, performers, band directors and flute instructors at the public school and collegiate level. Her flute teachers include Lawrence Trott, Donald Hartman, Adah Toland Mosello, George Morey, Joseph Mariano, Bonita Boyd and Murray Panitz. She and Ken have 3 daughters all of whom are musicians.