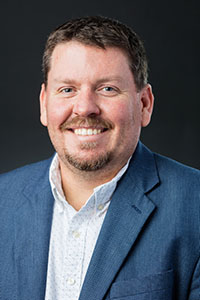 Dr. Jim Daughters is the Associate Director of Bands and Instructor of Music Education at Arkansas Tech University, where his primary duties include instructing the marching band, symphonic and concert bands, and teaching courses in secondary instrumental methods and music education. Jim also serves as the conductor and artistic director of the Fillmore Wind Band, Cincinnati’s professional and official wind ensemble. Daughters was previously the music director and adjunct faculty of the Cincinnati Junior Youth Wind Ensemble at the University of Cincinnati College-Conservatory of Music, visiting professor and Director of Bands at Xavier University (OH), and he taught for fifteen years as a Director of Bands in the Henderson County, Boone County, and the Kenton County public schools in Kentucky. Dr. Daughters holds graduate degrees from the University of Kentucky and was a conducting student of Richard Clary and Cody Birdwell.

Ensembles under Dr. Daughters’ direction have been recognized regionally and nationally with invited performances to The Midwest Clinic (Chicago, 2017), Music for All National Concert Band Festival, American Music Celebration at the University of Illinois Urbana-Champaign, International Jazz Educators Network Conference, the International Women’s Brass Conference; and numerous Ohio and Kentucky State Music Conferences with multiple ensembles. Dr. Daughters has twice been nominated and selected as a national semi-finalist for the GRAMMY® Awards National Music Educator of the Year, and he is a multiple recipient of the National Band Association Citation of Excellence. Daughters has received Teacher of the Year honors from KMEA District 6, Conner Middle School, was recognized twice as a Teacher Who Made a Difference by the University of Kentucky, and was inducted into the Honorable Order of Kentucky Colonels in 2005. He has been a guest conductor, clinician, and adjudicator with middle school, high school, and university bands, regional and state honor bands, and has presented clinics and demonstrations at several state music conferences, universities, and The Midwest Clinic. Dr. Daughters has published several articles on band pedagogy and march performance practice in music journals, and he is currently a committee chair for the National Band Association Repertoire Committee. Daughters was also one of only two American conductors selected to the 2014 Conductor’s Lab in Aix-en-Provence, France, to collaborate with members of the Berlin Philharmonic.

Dr. Daughters' 250+ arrangements and transcriptions have been performed by a variety of artists and ensembles, including world-renowned trumpeter, Arturo Sandoval, in addition to some of the nation’s elite high school and college marching bands. His music and show designs have won numerous circuit and state championships, in addition to medaling at Bands of America Regional and Grand National Championships.