Who (or what) is Takarabune? They are a world-renowned group of Awa Odori (one of the most well-known Japanese traditional dances with a 400 years of history). They push the limits of this venerable traditional art: their signature dance style is so aggressive and vigorous that it has been characterized as dance beyond Awa Odori’. They will perform on March 26 at 6 pm in Doc Bryan Lecture Hall on ATU campus as a part of their U.S. tour!

Little do you know, they are filming their journey from all over the U.S., so it can be submitted to the International Film Festival as a documentary. One of their stops is Arkansas Tech University! This means we want you to help not only make this experience memorable for them and ourselves, but also to show people from all over the world the support ATU has for one another.

We would like to encourage you to be a part of this film by attending to event at 6pm, but also we would like you to join us during their pre-performance march on campus BEFORE the show while they film!  Meet at Doc Bryan Lecture Hall at 4:30 pm SHARP to start a short practice session. Come in a Tech outfit (T-shirts, jerseys, sweat shirts, etc.,) if you have one. At 5pm you will start to go around campus performing the dance moves you recently learned with Takarabune and others. Your march will end by coming back to Doc Bryan Lecture Hall just in time for the event to TRULY experience their dance! We will reserve seats for those who participated during the march for the show. 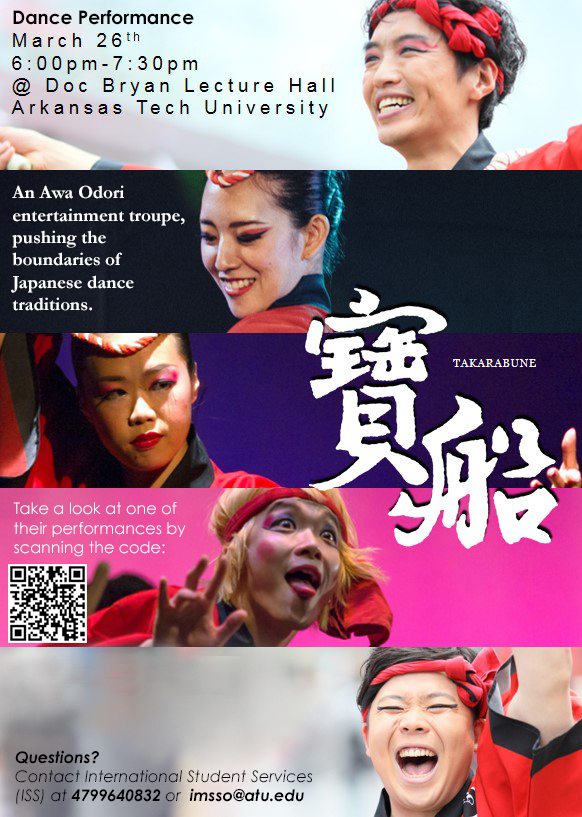