Current Arkansas K-12 art teachers are invited to participate in the 2022 Windgate Summer Art Launch for Arkansas Educators, hosted by the Arkansas Tech University Department of Art. This year's workshops will be in-person with some virtual components.

Participants will learn a variety of art techniques during workshops taught by university professors and experienced reginal artists. We will host a virtual orientation Sunday evening on June 12,  and our Guest speaker, Friday, June 17, will be virtual. There will be a virtual art exhibition of the artwork made during the week of workshops.

Participants will earn up to 30 hours of professional development from the Arkansas Department of Education. We ask that if you register that you can commit to attending the entire event.

Due to the generous support of the Windgate Foundation, the event is provided at no cost for Arkansas Art Educators.

In this day-long workshop, participants will experience the transformational process of hand papermaking with embedded words and images.  All steps in the process will be covered, with a focus on creative applications in the studio and classroom. We will work with various pulps such as cotton and recycled paper. The workshop will cover methods for preparing fibers, pulling deck-box made sheets, pigments, embedding/collaging words and images to form poems, couching, pressing, drying methods, and cleanup. The ancient process of papermaking is fun, tactile, expressive, safe, and eco-friendly. Open to all levels.

My Summer Art Launch workshops will be instructing the fundamentals of figure drawing. Wet and dry media will be introduced and students will draw from a live (draped) model.

Participants will create memories of people, places, or things through the use of collected photographs, fabrics, or favorite materials. We will engage in works of art by Romare Bearden, Kara Walker, Deborah Roberts and Lorna Simpson that will inspire the creative styles and art making process of the participants.

Geli for the Principles of Art

This workshop will explore a number of techniques to get your students Geli with creativity, by making a Geli print principles of design book. Participants will have a hands-on grasp of printmaking while learning through techniques like sgraffito, monoprinting, and using stencils. In this workshop you will explore with found objects to produce a series of one-off prints (monotypes). You will learn how to take both a planned and spontaneous approach to this printing method, working with an approach that there is no "right" or "wrong" way to create art through this process. All materials will be provided, though each participant can bring in their own stencils or texture plates. Participants will make choices that influence the outcome of their finished artworks.

Develop Your Digital Creative Skills with an Intro to Adobe Illustrator

Adobe Illustrator is a powerful drawing software program offered by Adobe. If you are new to Illustrator, don't be nervous or worried. Participants will learn everything they need to know in simple, everyday language to understand and operate the application. The workshop is for students new to Adobe Illustrator and design in general. We will start right at the beginning by navigating through Illustrator's interface, tools, and features to create designs that can be used for print, web, and social media.

This workshop will explore a number of techniques to create dynamic surfaces, using various clay techniques, participants will engage in best teaching practices of ceramics and explores various methods while creating a specific ceramics piece.

Neal Harrington was born in Rapid City, South Dakota in 1973.  He graduated from the University of South Dakota with a Bachelor of Fine Arts degree (emphasis in painting) in 1998.  Mr. Harrington then recently married, followed his wife to graduate school in Wichita, Kansas.  He graduated in 2001 with a Master of Fine Arts degree (emphasis in printmaking) from Wichita State University.  Currently Neal, Tammy and their two children live in Russellville, Arkansas, where he has taught at Arkansas Tech University since 2001.

Melissa Cowper-Smith is a multimedia artist who uses projected video animation, digital printing, hand papermaking, collage, and painting to express forgetting and the passing of time. In addition to making art, Cowper-Smith grows fibers, food, and flowers on her farm, Wildland Gardens. She teaches at the University of Central Arkansas. She has shown her work nationally including recent shows at the Arkansas Arts Center (Little Rock, AR) The Rockford University Gallery (Rockford, IN), and Historic Arkansas Museum (Little Rock, AR). In 2018, she was awarded an Artists Scholarship from ACNMWA, an Executive Directors Scholarship from Anderson Ranch Arts Center, and an Individual Artists Fellowship from the Arkansas Arts Council. Melissa has a BFA from the University of Victoria (British Columbia, Canada) and an MFA from Hunter College (NYC).

Maberry produces mixed media paintings, drawings, and sculptures. She believes that art should be a vehicle of communication about our history and help to raise awareness of the many injustices in society. Her painting series on American Slavery was featured for more than 7 years on Slavery in America website (sponsored by New York Life). Her Social Justice/Protest series on the Confederate flag is featured on the VICE website https://www.vice.com/en/article/gvedmx/johnnie-mae-maberry-heart-dixie-art-is-social-commentary-50statesofart Her works have been exhibited nationally and internationally.

Johnnie Maberry is a retired Associate Professor of Art (Tougaloo College) where  served 32 years as full-time faculty, Art Department Chair, Curator of the Tougaloo Art Collection (2013-2017), Director of The Tougaloo Art Colony (2005-2016). She currently serves as Co-director of Tougaloo College’s Institute for the Study of Modern Day Slavery funded by the Andrew Mellon Foundation.

Samantha Shipley was born in Hartman, Arkansas in 1982. She received her BFA in Graphic Design from Arkansas Tech University in 2007 and her MAT with Emphasis in Art in 2018 from University of Central Arkansas. Samantha worked in the corporate world as a Graphic Designer for 10 years. She then transitioned to the classroom where she has taught K-12 for the past four years and grade 5-8 currently. Samantha currently holds the position as a Lead Teacher for Arch Ford Coop and she is the Treasurer for the Arkansas Arts Educators Association. Samantha has been an Art Instructor for the Upward Bound summer program at Arkansas Tech University for the past 3 years. Samantha is married to Brandon Shipley and they have four children together. Samantha creates art in all different types of media, when she is not teaching, including freelance graphic design, painting, ceramics, printmaking, and textile arts.

Smith Julmisse is a Creative Designer based out of Austin, Texas, who has developed and executed visual communication strategies for approximately 15 plus years as a freelancer and working for the City of Austin, the US Army, and Whole Foods Market.

He acquired his Bachelor of Arts Degree in Graphic Design from Wayne State University in Detroit, Michigan, and a diploma degree in Web Design and Interactive Communication from The Art Institute in Fort Lauderdale, Florida.

Smith has built a solid background in branding and marketing strategies for the private and public sectors by utilizing several Creative Cloud applications such as Adobe's Illustrator, Photoshop, InDesign, Fresco, After Effects, and Premiere. His work experience consists of developing and enhancing corporate brand identities from concept to deployment, leading and mentoring designers, building relationships with internal and external stakeholders, and working closely with cross-functional teams with their marketing communication efforts.

Smith's work has been acknowledged by Adobe on Instagram and Behance. Also, he received an Apex Award for 2016 Publication of Excellence and the 2016 National Community Improvement Award for Improved Recycling design campaign.

This year campus housing will not be provided, so participants will be responsible for their own accommodations. We recommend the following hotels in Russellville:

ON CAMPUS DINING OPTIONS FOR LUNCH

Chambers Dinning Hall
In the Dining Hall you have options such as the freshly prepared salad bar, deli, Mongolian Wok, stone oven baked pizza, the grill, fantastic desserts, home cooked yumminess, and so much more.

Due to Covid 19 at this time, all of our food is in take out containers but still gives you the freshness and all you can eat experience. Please get a new cup each time you need to refill your drink.

Baz Tech
Baswell Techionary offers specialty sandwiches from Which Wich, pizza in a variety of flavors from Bona Dea, chicken strips & salads from Slim Chickens, the best burgers from Jerry's Diner and a variety of drinks from Starbucks "We Proudly Serve".

Bona Dea offers a variety of our pizzas and salads for your taste buds. Each are made fresh daily. Can't get into Baz Tech but want pizza, don't worry you can also find them at our C-Store located in Doc Bryan.

Jerry's Diner is our southern concept that offers a variety of breakfast sandwiches & burritos along with the best cheeseburgers & fries combo in town. They also serve grilled cheese, patty melts, BLT's, grilled chicken sandwiches and much more.

Starbucks Every coffee we create has a rich story behind it—from the origin of the beans and our rigorous selection process to our blending and roasting artistry. Whether you’re sipping our hearty Starbucks Gold Coast Blend or getting reacquainted with our seasonal Starbucks Tribute Blend, you’ll taste our coffee passion in every cup. Starbucks Food Service is the leading provider of specialty coffee brands, dedicated to serving the unique needs of business-to-business venues including food service and office coffee operators, who in turn serve the consumer.

Which Wich® is a fresh, innovative concept featuring superior sandwiches served in an edgy, magnetic environment. In addition to more than 50 customizable “wiches”, including the signature Wicked® loaded with five meats and three cheeses, Which Wich is known for its revolutionary ordering system.

All activities will be held in the Norman Art Building on the Arkansas Tech University Campus in Russellville. The map below provides directions to Norman Hall. 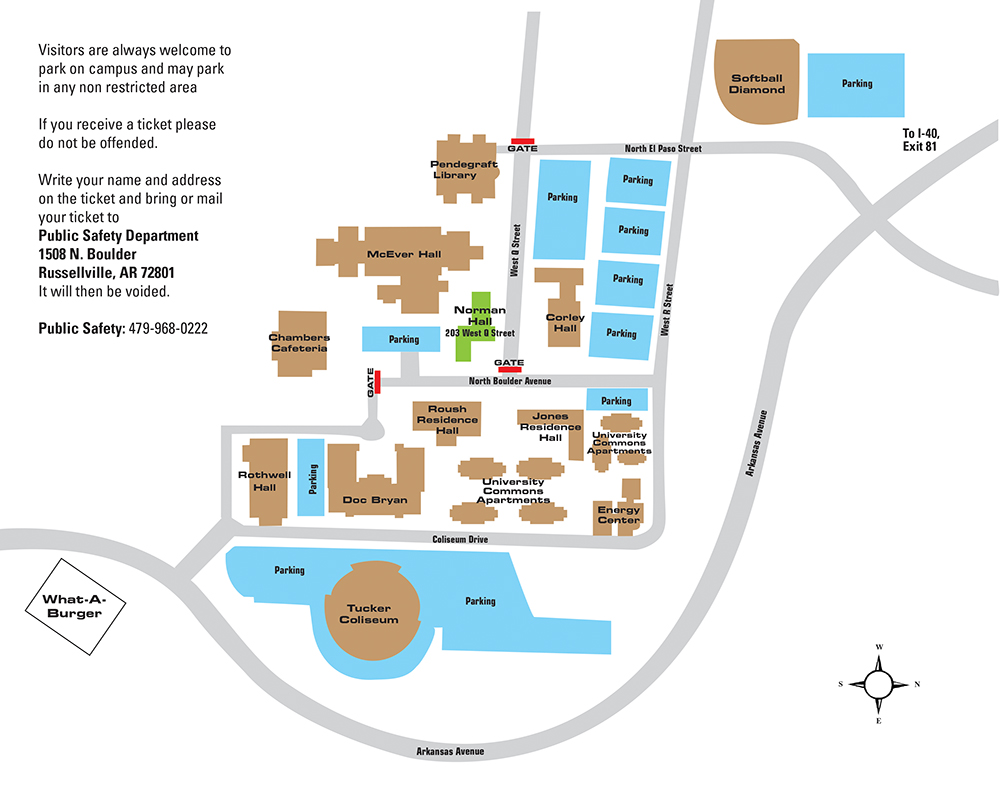